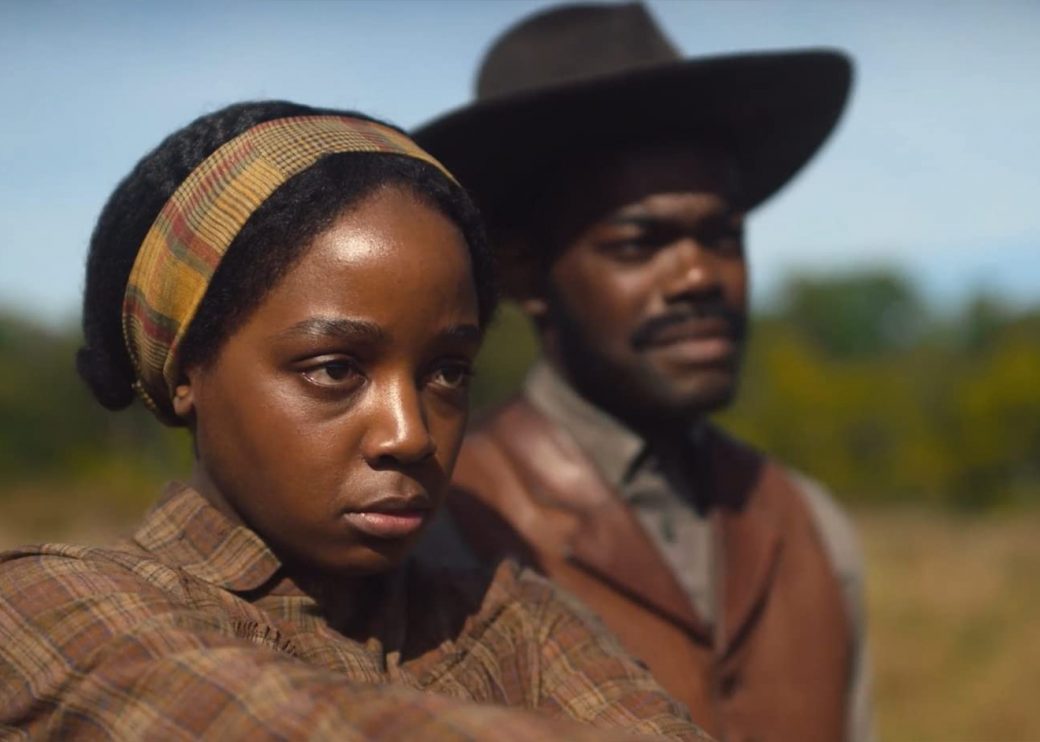 Based on the novel by Colson Whitehead

The Underground Railroad, directed by Oscar winner Barry Jenkins (Moonlight) is a graphic and unflinching reimagining of Colson Whitehead’s Pulitzer Prize-winning novel. It’s an African American slave narrative that lights up the screen on a visually arresting and deeply spiritually affecting journey.

The ten-episode series follows the story of Cora (Thuso Mbedu) an enslaved woman born on a plantation in Georgia and her attempts to escape to freedom. Approached by Caesar (Aaron Pierre), who shares his plan to escape, offering her a lifeline, Cora agrees to go with him. It isn’t until later that we recognize that freedom comes at a cost.

The opening sequence is dreamlike and beautiful, shot in slow motion and lit ethereally. The first episode then launches into the terror, the fear and the all too real consequences of racism and hate. In this first episode we see the underground railroad of the title. It is not the historically accurate network of free men and women and their white allies who devised a route of safe houses from the slave states to the free states and even further into Canada. Rather it’s a reimagined version where black people and their allies have built an actual underground railroad, a network of tunnels and trains. Both Jenkins and Whitehead have said that as children they imagined their ancestors had built a real railroad. Honoring their ancestors is important to Jenkins and Whitehead; it’s why they wanted to tell this story. Jenkins has previously adapted James Baldwin’s novel, If Beale Street Could Talk, and seems to have streamlined the process with this project; he tells the story like it was his to tell.

The more we see Cora the more we feel for her. Her nemesis, Arnold Ridgeway (Joel Edgerton), is the slave-catcher whose connection to Cora is the crux of this story. Cora’s mother Mabel was a runaway and it was Ridgeway’s responsibility to capture her. His inability to do so filled him with frustration and fury, and left him hollowed out with only his determination to succeed. It leads to an all-consuming obsession with capturing Cora. Edgerton’s performance as the cold-blooded slave-catcher is terrifying yet still displays moments of humanity. The unrelenting ferocious physicality of the character looms large in this chilling performance. His right-hand man is Homer (Chase Dillon), a black ten-year-old boy who is equally chilling. Homer serves his master but also seems to have an unnatural affection for him. He appears to have been shaped perversely by the world and to have developed some form of Stockholm syndrome.

The young South African actor Thuso Mbedu brings Cora to life as a survivor. She is emotionally withdrawn and understandably finds it hard to trust in anyone. Mbedu manages to realistically convey pain, misery, anger and hate. She is beaten and haggard but she is resilient and her strength inspires hope.  Cora says of herself: ‘I ain’t nobody’s good luck’; even though she believes her existence is cursed, she somehow finds the fortitude to carry on. A fraction of her travails would leave most of us broken and bereft. On her journey her appearance changes when she moves from a slave state to a free state; her clothes are nicer, her hair straightened. Of course you can’t think about the underground railroad without thinking about Harriet Tubman, one of the real life conductors of the railroad, codenamed Moses. Cora reminded me of Harriet, even down to the scar on her forehead. It is estimated that after running away Harriet returned to the slave states at least nineteen times between 1850 and 1860, freeing hundreds of enslaved people.

Watching the film is a visually arresting experience. The landscapes are stunning and change in tone and mood along her journey. Jenkins uses the light perfectly: he obviously knows how to shoot black people and brings out the beauty of black skin. Reminiscent of Spike Lee, Jenkins makes use of lingering shots of the extras, a powerful sea of black faces.

As a lover of the horror genre, episode 2 particularly appealed to me. We see Cora reach South Carolina where the black population seemingly have freedom, but there are some insidious forces at work. This episode took me straight to Jordan Peele’s Get Out, with things taking a sinister turn.

The music and soundtrack are perfect. At the end of the episodes, classic tracks drop, from Pharcyde to Childish Gambino to Michael Jackson, fitting the mood precisely.

Overall it’s a visual and aural tour de force that will linger in my psyche for some time.

A warning however, Underground Railroad will not be for everybody. There are many triggers but if you can handle it, it’s well worth the ride.

Love is the Message, the Message is Death
A ‘Black Visual Intonation’, in which ‘things’ are put ‘in affective proximity to one another’.
Harlem Shuffle
A street-wise paean to the particular richness of New York.
The French Dispatch
Wes Anderson's paen to the glory days of print journalism
Search
We use necessary functional cookies to make our website work properly, and optional anonymised analytics cookies to help us make it work better.
ACCEPT ALL Cookie Settings Read More
Manage consent

This website uses cookies to improve your experience while you navigate through the website. Out of these cookies, the cookies that are categorized as necessary are stored on your browser as they are essential for the working of basic functionalities of the website. We also use third-party cookies that help us analyze and understand how you use this website. These cookies will be stored in your browser only with your consent. You also have the option to opt-out of these cookies. But opting out of some of these cookies may have an effect on your browsing experience.
Necessary Always Enabled
Necessary cookies are absolutely essential for the website to function properly. These cookies ensure basic functionalities and security features of the website, anonymously.
Anonymised analytics
Analytical cookies are used to understand how visitors interact with the website. These cookies help provide information on metrics the number of visitors, bounce rate, traffic source, etc.
Save & Accept